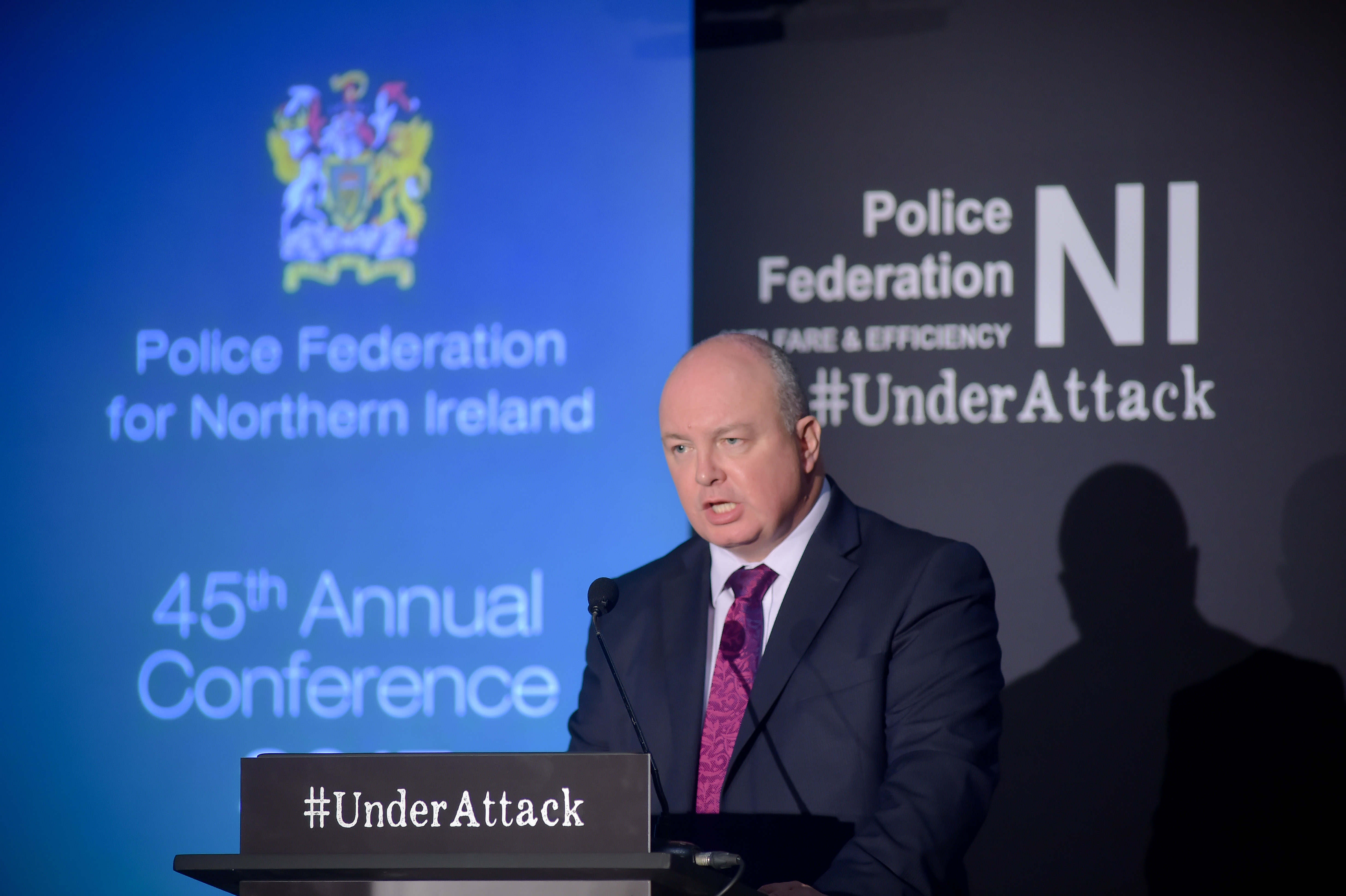 Revealing details of a survey of officers, the Federation said violence was widespread with 91% of those assaulted reporting unarmed physical assaults including wrestling, hitting and kicking.

Almost half (47%) of those who took part in the on-line survey said they had to deal with being threatened or assaulted with an offensive weapon such as a stick or bottle, and 13% assaulted with a deadly weapon including a firearm.

The Chairman of the PFNI, Mark Lindsay, said the level of assault was unacceptably high and he called for measures to be introduced to protect officers.

Nearly three-quarters of Officers highlighted the disgusting act of being spat at while they did their job.
Addressing assembled delegates attending the 45th Annual Conference of the PFNI, Mr. Lindsay, said they’d long campaigned for the introduction of spitguards to counter this sickening practice.

Mr Lindsay said: “We demand the immediate introduction of spitguards to afford adequate protection to officers….Spitting isn’t the same as suffering a physical injury or bruise, but it is every bit as bad, and every bit as unacceptable. The message has to go out that if you don’t want to wear a spitguard, then you shouldn’t spit at officers.”

He said officers were also under attack from Government austerity where budget cuts were leading to the loss of hundreds of posts and where officer pay had fallen by 15% in real terms through no or negligible pay rises.

Mr Lindsay added: “Austerity has inflicted great damage, and it has to come to an end. In the world of government finances, policing is a low-hanging fruit. It’s short-termism at its worst and demands a different approach.”

Representatives also heard how officer confidence in the function and operation of the Police Ombudsman for Northern Ireland (PONI) had reached a new low.

Mr Lindsay said: “The recent revelations about a firearm in a drawer and the theft of the most sensitive of information demand that the Government must redefine the role of the office to ensure that the men and women I represent are not the victims of a ‘witchhunt’, and are not hung out to dry without the benefit of an appeal process.

“Reform is not so much desirable as essential. There is an obvious need for an independent avenue of appeal, whereby officers will have meaningful redress against malicious complaints and inept investigations.”

On legacy issues, Mr Lindsay told conference that the PFNI would be “implacably opposed to any attempt to equate the actions of terrorists with the heroic and selfless efforts of officers to protect the wider community.”