The Chair of the Police Federation for Northern Ireland says it would be ‘a disrespectful and a shameful act of betrayal’ to link the names of Officers with those of the terrorists in the debate on legacy.

The Chair of the Police Federation for Northern Ireland says it would be ‘a disrespectful and a shameful act of betrayal’ to link the names of Officers with those of the terrorists in the debate on legacy. 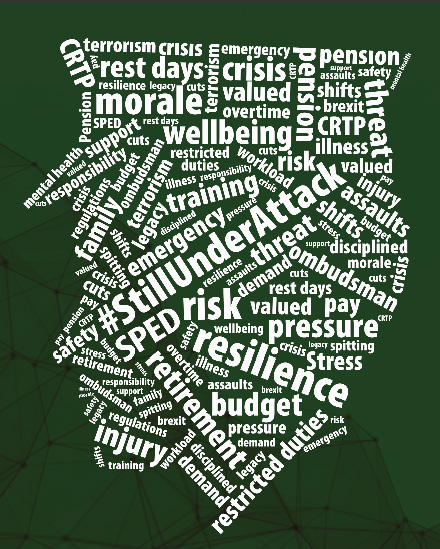 Mark Lindsay told more than 100 delegates attending the PFNI’s Annual Conference that the organisation was opposed to any amnesty and to attempts to define the word ‘collusion’, which sought to retrospectively criminalise both serving and retired Officers.

The RUC GC had 302 Officers murdered and thousands injured during the ‘Troubles’.

Dealing with the government’s current consultation on legacy, Mr Lindsay said:  “Closure on the past delivers up raw emotions, none more so than with the relatives of our colleagues who gave their all…for peace.

“Let me be clear: This organisation is totally opposed to any legislation which proposes an amnesty for any crime. That’s any crime, whether committed by a police officer or terrorist from any side of the divide.

“Society must now decide, whether the solution is a political solution or a criminal justice solution.

“If justice is to be done fairly, then society must move away from rumour, story-telling and political agenda and deal only with facts in law.

“It would be the most monstrous injustice to our murdered men and women if we were to accept some half-baked idea that resulted in the names of our colleagues being sacrificed for the sake of political expediency.

“That would be the ultimate insult!

“Our colleagues did what was right. They must not be treated the same as the people who pulled the trigger or planted the bomb.

“They saved tens of thousands of lives while terrorist groupings wrought havoc and misery.

“So, it would be intolerable and massively offensive if their good names were to be used in the same breath as the killers who sought ‘parity of esteem’ by using a warped parity of misery and pain.

“A disrespectful and shameful act of betrayal.

“It is also unacceptable that terms such as ‘collusion’ are bandied about, without either legal definition or proof.

“There is a clear and determined attempt to define the word ‘collusion’ as a catch-all, which would be widely open to misinterpretation.

“It is attempting to retrospectively criminalise policing and Officers, both serving and

“It also does a great disservice to those men and women who put their lives on the line to protect our communities.

“…..It is perverse that the very people who built the foundations for peace should now be scapegoated for the sake of political expediency.”

Mr Lindsay also set out the case for the recruitment of hundreds of additional Officers to deal with whatever emerged from negotiations about the border in a post-Brexit era.